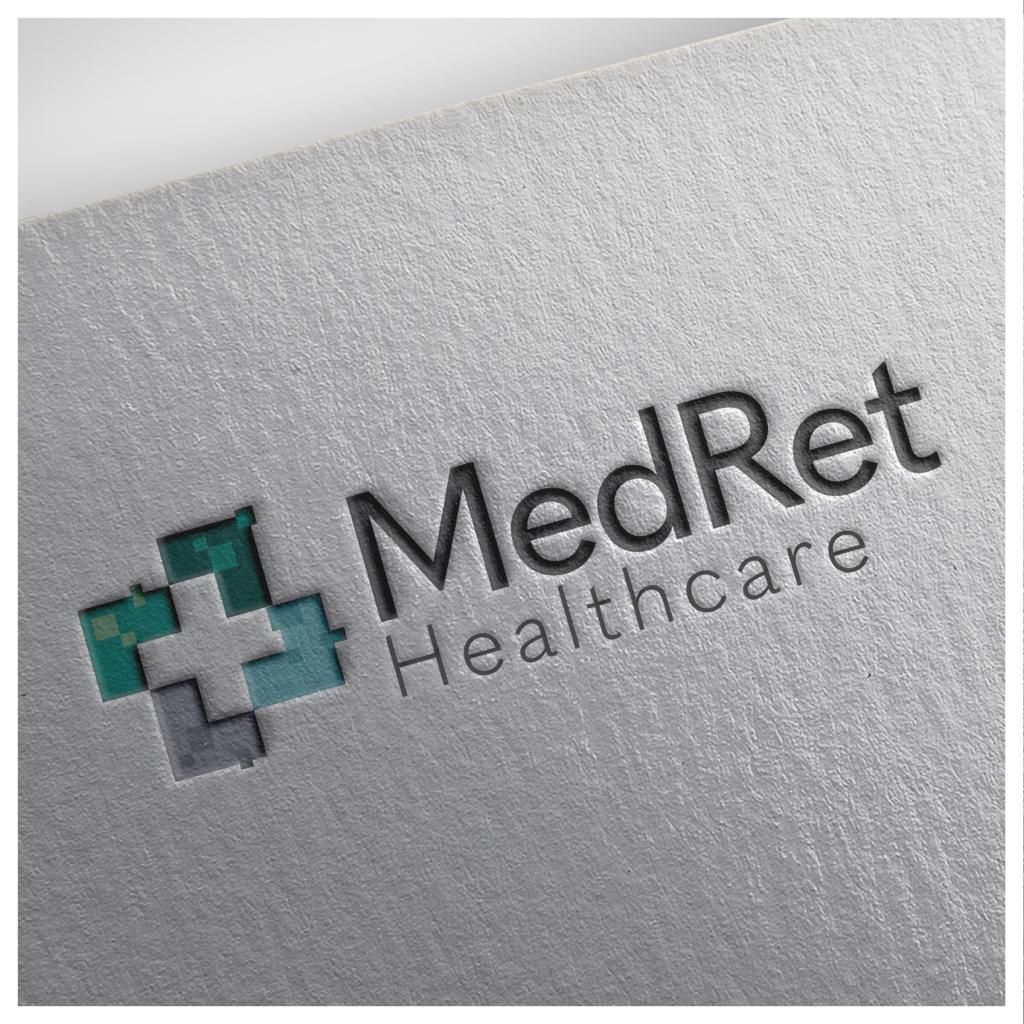 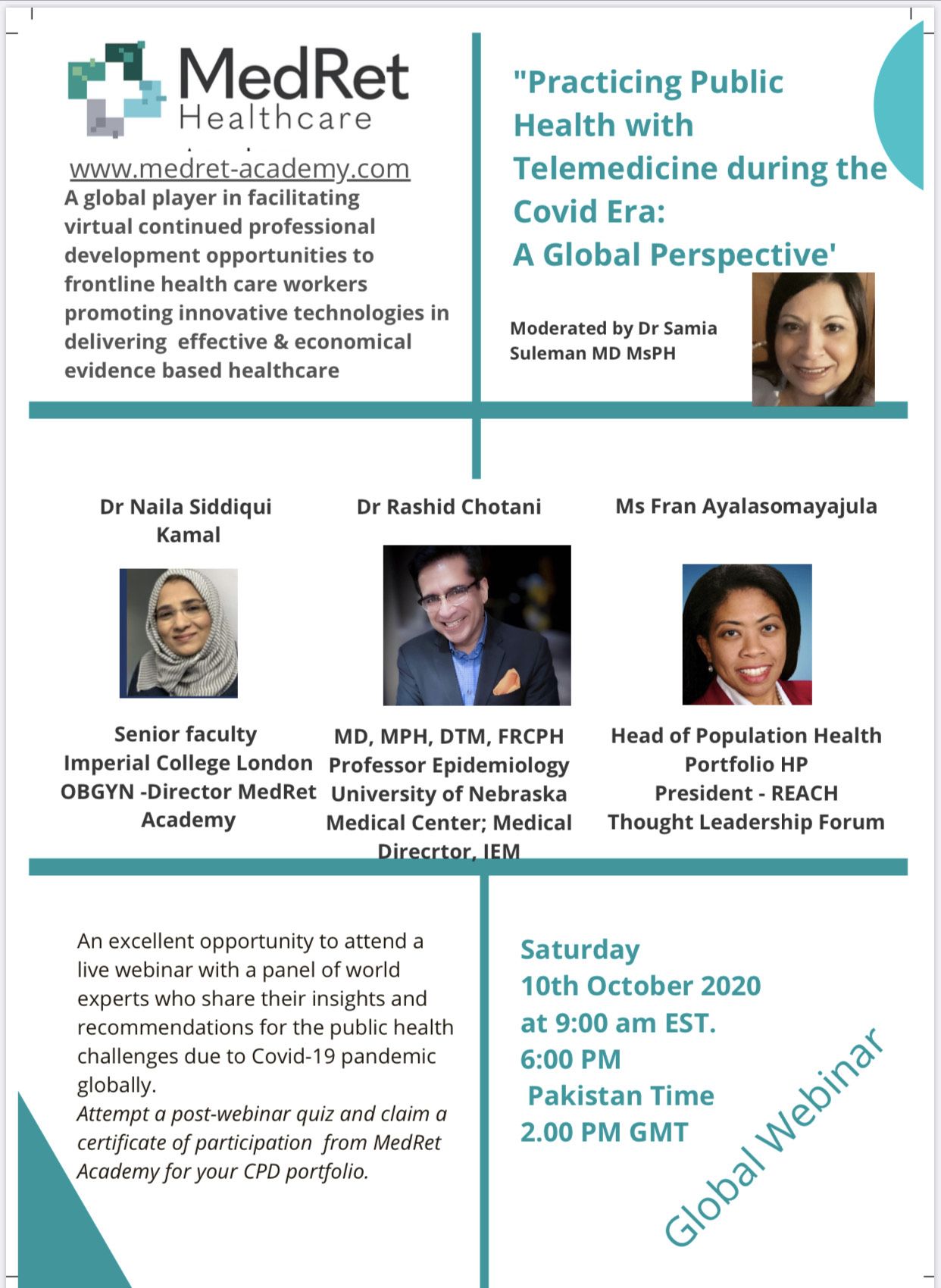 Practicing Public Health with Telemedicine During the Covid Era; A global perspective

An excellent discussion on the epidemiology of COVID -19 globally and steps to curtail it.
Great engagement with the audience!

Watch the recording---> Take the assessment---> Claim your Certificate of Participation!

Dr Naila Siddiqui Kamal is a Fellow of the Royal College of Obstetricians & Gynaecologists.

She has been affiliated with the NHS for the past 28 years.

She has held senior positions such as Associate Dean at London Deanery.

She currently is clinically active, and her sub-specialty is ambulatory gynaecological cancer. She is also Associate Director of Medical Education at her Trust and Senior (Hon) Lecturer at Imperial School of Medicine.

She has inventor status at Imperial for her work in developing an interactive learning resource using disruptive technologies.

She is a frequent speaker on disruptive technologies and their place in futuristic healthcare. She has moderated high level track sessions at World Summit of Information Society (WSIS) 2019 conference in Geneva and facilitated an inaugural session on SMART health ecosystems.

Naila is an entrepreneur and has established the MedRet Academy, an online education hub for clinical workforce for continued professional development.

For over 20 years, Fran Ayalasomayajula, executive healthcare strategist and technologist, has been dedicated to serving the interests of populations around the world, in an effort to improve the quality of healthcare, provision access to healthcare, and increase health literacy and patient engagement.

Currently the Head of Population Health, Worldwide for HP, Inc., Fran directs the organization in the development of strategies and innovations designed to advance and deliver improved clinical outcomes and better population health. Prior to HP, Fran worked for major health and Life Science institutions, including WHO, CDC, BMS, and UHG. Fran holds degrees in epidemiology, public health, information technology, and certifications in project and clinical trial management.

She is actively involved in community minded initiatives, such as rare disease patient advocacy, and the application of technology services for the promotion of health and racial equity, accessibility, and aging with independence and social connectedness. In 2015, Fran was a contributing writer on the Fact Sheet submitted to the White House Conference on Aging, and in 2017 co-author of the LeadingAge whitepaper on Social Connectedness and Engagement Technology for Long-Term and Post-Acute Care. Presently she is spearheading Save Moms, a national campaign to stop the occurrence of avoidable maternal deaths during and after childbirth.

Fran is the author of several publications on technology-enabled population health management, including best practices for the successful adoption of virtual reality in the clinical setting and global connected health innovations in Cardiology, as well as contributing author to the 2020 Academic Press book entitled "Intelligence-Based Medicine: Artificial Intelligence and Human Cognition in Clinical Medicine and Healthcare". Her research spans a variety of topics including measures for scaling global connected health programs, clinical empathy, technology adoption for aging well, and the deployment of digital technology for the prevention of maternal mortality and morbidity. Most recently she conducted a number of research investigations and publications on health disparities and the use of technology during the COVID-19 pandemic.

Fran is presently a Board Member of the NHA of San Diego; Advisory Board Member of the PCHAlliance; Advisory Council Member of Artificial Intelligence in Medicine (AIMED); and the co-chair of the PCHAlliance Aging and Technology Taskforce. She is also a member of the Board of Directors for the Health and Fitness Technology Division of the Consumer Technology Association (CTA); an active member of the Center on Aging Services and Technologies, LeadingAge and the American Telemedicine Association; founder of IBHealthy 501(c)(3) promoting community wellness; and founding President of Reach, a 501(c)3 global non-profit social impact organization whose mission is to improve the healthcare experience of both providers and patients.

Dr. Rashid Chotani M.D., MPH, DTM, FRCPH
Virginia, USA
Dr. Rashid Chotani, recipient of the 2016 “NATO Scientific Award for Counterterrorism,” and in 2020 was recognized by
Pakistan to me on the “2020 Honor List” for his efforts on COVID-19 globally. He has spent over 20 years providing biodefense,
infectious disease epidemiology (with a focus on influenza, SARS CoV, MERS-CoV, SARS CoV-2, zika, Ebola, CCHF, dengue etc.), public
health, and emergency management expertise to public agencies, private industry, academia and non-profits. He is a recognized
expert in the medical countermeasure (MCM) development, biosecurity, healthcare management, health surveillance, and
diagnosis of human and zoonotic diseases. He has applied this expertise to groundbreaking research and development and
advanced development of programs for naturally occurring, man-made and/or genetically modified biological and
chemical agents. Currently, Dr. Chotani holds appointments as Medical Director, IEM; Chief Scientific Officer, Washington Vascular
Specialists; VP Medical Affairs, CareLife; and Adjunct Professor of Epidemiology at the University of Nebraska Medical Center. He
also serves as a Senior Fellow, Potomac Institute for Policy Studies and has served as an Adjunct Professor, College of
Professional Studies at the George Washington University with a focus on public health emergency and crisis communication. His
clinical team at CareLife Medical established the first serologic antibody (10-min Rapid Detection of IgM/IgG) immunoassay-screening
site in Fairfax, Virginia. He has also introduced a bill to the Senate and the House to create a “National SARS-CoV 2 (COVID-19)
Immune Registry.
Dr. Chotani has provided key scientific and medical leadership to the Chemical Biological Defense Programs at the US Department
of Defense (DOD). He was the Chief Scientist and Program Manager of JSTO’s $800M portfolio of applied research and
development projects focused on developing FDA-compliant MCM’s – therapeutics, vaccines and diagnostic devices. As a Senior
Scientist, he established and managed the Medical Surveillance Systems and Medical Effects Modeling Thrust Areas program
that is the second largest division at JSTO. As the Chief Scientist, with JPEO, he served the Joint Project Manager Chemical and
Biological Medical Systems, managing the $500M MCM advanced development program. Additionally, he led the establishment of
the bio-surveillance program, as well as the supervision of all clinical trials from a safety, efficacy, budgetary and time perspective.
In 1999 after he finished his fellowship in Hospital Epidemiology and Microbiology at the Johns Hopkins Hospital, where he was
trained to conduct outbreak investigations, he was selected as a DARPA post-doctorate fellow at the Johns Hopkins Applied Physics
Laboratory. This was the DARPA Challenge to develop the first Early Detection of Bioterrorism System. He completed a 2-year
proof-of-concept challenge in 8 months, and then led as co-PI the $16M DARPA program to operationalize it. Ultimately, this
program became operational as ESSENCE at the DoD and was adopted by the CDC in their BioSense program. Dr. Chotani’s success
in the academic field includes establishing and directing the Global Infectious Disease Surveillance and Alert System (GIDSAS) at
Johns Hopkins University, where he also served as an Assistant Professor at the School of Medicine, Public Health and the Center
for International Disaster &amp; Refugee Studies. He led missions after the 2004 tsunami in Indonesia and Sri Lanka and well as the 2005
earthquake in Pakistan. He led the building of the Epidemic Investigation Cell and Disease Early Warning System in Pakistan. During
his career, he has worked on out-the-box cutting-edge technologies such as working on the adult trivalent vaccine for Filovirus,
monoclonal antibodies for Ebola, developing solutions for a genetically engineered highly virulent influenza strain and other
infectious diseases. Additionally, he advocated and pushed programs such as, rapid healing of fractures by controlling the calcium
channels, and the spider-man suite using nanoparticles to cover the body against chemical or biological agents and placement of
intradermal MCM that are released at the time of exposure, triggered by nano-sensors.
From 2016-19, he led the charge to make MCC Medical Clinic to become the largest multi-disciplinary, safety-net, not-for-profit
Clinic in the US open 7 days a week from 9 am to 5 pm, serving the uninsured and underinsured with a staff of 50+, anticipated total
patient-encounters for FY2020 of over 20,000 and a budget of $3.2M (Contracts, Grants, Fundraising). In under two years
successfully increasing the total budget by over 70% and patient encounters by 70% and brought national attention to the Clinic.
Dr. Chotani is a Fellow of the Royal College of Public Health. He earned his MD from the Eugenio Maria de Hostos School of Medicine
and holds a Master of Public Health in Epidemiology and Biostatistics &amp; International Health from Johns Hopkins. He served there as
Dr. D. A. Henderson’s research assistant and then a post-doctorate fellow. Dr. Chotani has authored and co-authored over 50 scientific
peer-reviewed papers on topics ranging from planning for pandemics to identifying innovative surveillance methods for rapid
detection of disease outbreaks and bioterrorism. He is a prolific public speaker, having presented more than 30 scientific peer-
reviewed papers during his academic career and has spoken on public health and biosecurity interests at over 70 national and
international conferences. He is a weekly commentator on Fox Business News since March on COVID-19. He has served as a
board member of American Immigration Council and the Chairperson of the APPNA University Committee and Member of
APPNA Advocacy Committee; he continues to server on the Saint Andrews Humanitarian Forum.
Rashid A. Chotani, MD, MPH, DTM

Dr Samia S  Sheikh MD, MPH
Practicing GP Louisiana USA
Major in Public Health Johns Hopkins USA
Masters Public Health Tulane University of Public Health & Tropical Diseases USA
Dr. Samia Suleman is a licensed general practitioner in the state of Louisiana in the USA. She began her journey in medicine from an early age; being the daughter of a general surgeon and pediatrician she was determined on paving her niche in medicine. She graduated from The Johns Hopkins University in 2001 majoring in public health. She went on to receive her Masters in Public Health from the Tulane University School of Public Health and Tropical Medicine in 2007 and her doctor of Medicine from Louisiana State University in New Orleans in 2014. She has contributed to several medical papers in oncology and has contributed to her passion of public health by volunteering in medical missions to Mexico, assisting in the development of the School of public health at the Dow University of Health Sciences in Karachi, Pakistan, where she was a senior lecturer. Dr. Suleman has practiced both in the states and internationally in Ireland where she lived from 2016- 2018.
Copyright © 2020 Ywww.medret-academy.com. All rights reserved  - Created with

Select a course first to display its contents.

No available contents for

There are no free, paid or coming soon courses in your school yet.
Why don't you create one?

The school owner is working hard preparing the courses for you.

Oops, you haven't created any courses yet.

Wouldn't it be a good idea to create a course?

No blog posts found in your blog. Why don't you create one?